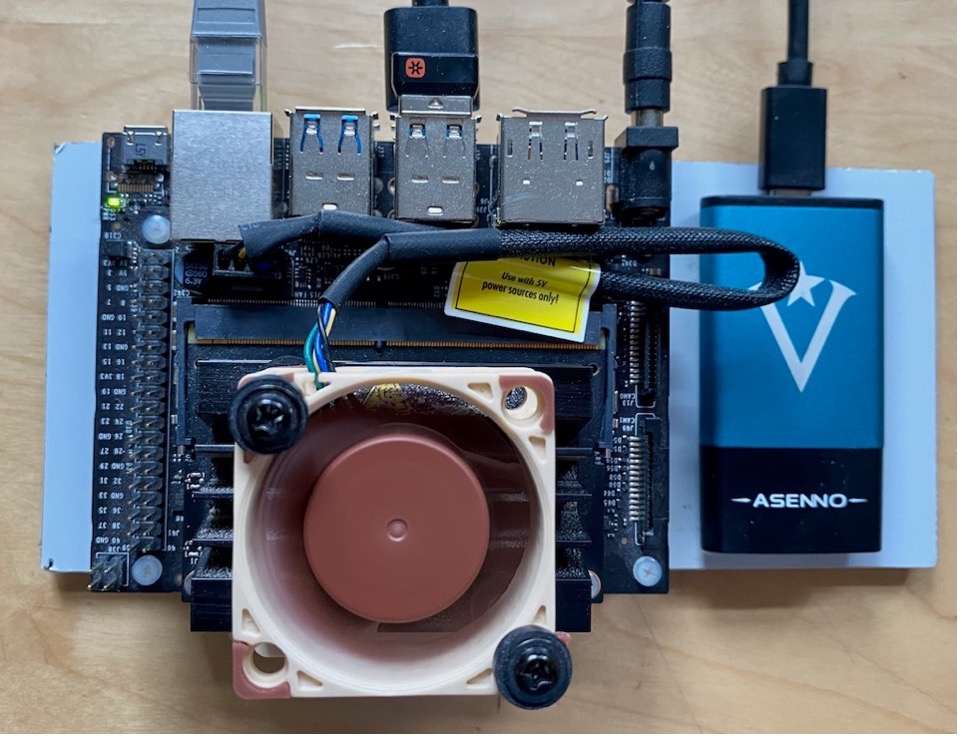 It is possible to use the Nvidia Jetson dev kit devices for the build environment. There can be restrictions due to lack of disk storage and RAM, especially on the Jetson Nano.

In this document this native build environment will be run on a Nano, with the addition of a low cost USB3 SSD add-on.

Running on the Nvidia Jetson Nano

The advantage of the Jetson Nano is that it is the cheapest hardware on which to run CUDA-accelerated software at the edge.

It comes with a power supply, the Jetson Nano compute module on a motherboard that exposes 4 USB3.0, standard HDMI and DisplayPort, RJ45 1Gb/s ethernet and a micro-SD card socket
The Jetson Nano dev kit with 4GB RAM costs ~£100.

Please note that the 2GB RAM version does not have sufficient RAM space for effective development.

To start, go through the initialisation of your Nano, following the steps outlined here: https://developer.nvidia.com/embedded/learn/get-started-jetson-nano-devkit

The current build is JetPack 4.6 and is a ~6GB zip file. You will need a 32GB micro SD card for this, but the card is only needed for the setup.

The default config depends on using the SD card as the main system disk and this really does not have sufficient read/write performance for development activities.

Fortunately, the current and future versions of JetPack transfers /boot from the SD card on first install to NOR memory on the Nano (QSPI-NOR) so that the root filesystem can exist either on an SD card or USB storage.

This move to placing /boot in NOR means that SD card image can be transferred to a USB SSD with a typical performance boost of 5-10x over the fastest SD card.

SSD hardware is designed for constant read/write, unlike SD cards – so it really makes sense to buy a USB3 SSD device; a 120GB version costs ~£30

Note that USB3 SSD is not the same as a USB3 memory stick – just search online for USB3 SSD
Refer to https://jetsonhacks.com/2021/03/10/jetson-nano-boot-from-usb/ for full instructions.

The second issue is lack of RAM for complex make/compile development. By default, the Jetson Nano image runs a virtual swap space using a special compressed file format (nvzram) that runs in RAM.

With the USB SSD in place, we can dispense with nvzram, in preference to a standard swapfile and there is a script available from JetsonHacks – https://jetsonhacks.com/2019/04/14/jetson-nano-use-more-memory/

A 6GB swapfile is reasonable to run with the 4GB RAM device.
Note that the nvzram swapfile solution needs to be disabled

Make sure to reboot after creating the new swapfile and disabling the nvzram.
The Nvidia JetPack SDcard image has Docker installed, so the SeeChange build environment can be pulled from Docker Hub directly onto the Nano.

There are several build environment docker images available and they are labelled using with a specific convention, for example

There are lots of clever ways to build a personalised docker environment, but it is possible to load the image and run a bash shell with

Just FYI, in Docker Hub click on the highlighted name directly under the word TAG to see the build script for the image

Just FYI, in Docker Hub click on the highlighted name directly under the word TAG to see the build
script for the image

To see a list of the images available. Copy the IMAGE ID for build environment into

The Docker command line option ‘-v local:container’ provides a symbolic link between your local folder and an accessible folder within the build environment container (/tmp)

So, to include a local build environment into the Docker container

The next step is to run through a cmake, make, make test, make install process to build the example inferrer in the Docker container

A tarball containing this file and a descriptive json file should be bundled together. This can then be imported as an asset via the SeeWare adminUI

The json file has the following structure

A more flexible method to create the tarball is provided by a Python script – asset_maker.py Here is an example, starting from the build folder

The result is a loadable asset that can be added for deployment via a solution in the SeeWare admin UI. It will simply draw random bounding boxes with a single pixel red line on any stream associated with the Nano as processor.

No comments to show.
We use cookies on our website to give you the most relevant experience by remembering your preferences and repeat visits. By clicking “Accept All”, you consent to the use of ALL the cookies. However, you may visit "Cookie Settings" to provide a controlled consent.
Cookie SettingsAccept All
Manage consent

This website uses cookies to improve your experience while you navigate through the website. Out of these, the cookies that are categorized as necessary are stored on your browser as they are essential for the working of basic functionalities of the website. We also use third-party cookies that help us analyze and understand how you use this website. These cookies will be stored in your browser only with your consent. You also have the option to opt-out of these cookies. But opting out of some of these cookies may affect your browsing experience.
Necessary Always Enabled
Necessary cookies are absolutely essential for the website to function properly. These cookies ensure basic functionalities and security features of the website, anonymously.
Functional
Functional cookies help to perform certain functionalities like sharing the content of the website on social media platforms, collect feedbacks, and other third-party features.
Performance
Performance cookies are used to understand and analyze the key performance indexes of the website which helps in delivering a better user experience for the visitors.
Analytics
Analytical cookies are used to understand how visitors interact with the website. These cookies help provide information on metrics the number of visitors, bounce rate, traffic source, etc.
Advertisement
Advertisement cookies are used to provide visitors with relevant ads and marketing campaigns. These cookies track visitors across websites and collect information to provide customized ads.
Others
Other uncategorized cookies are those that are being analyzed and have not been classified into a category as yet.
SAVE & ACCEPT